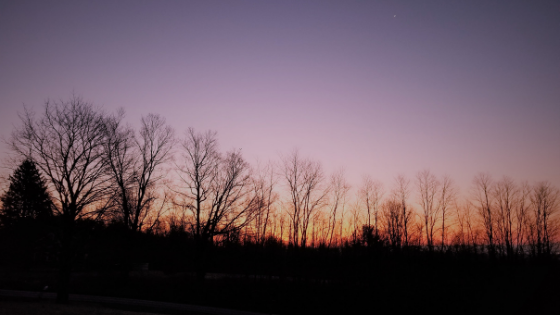 Have you ever had a week where you’ve gotten a lot done but don’t feel like anything has happened?? That’s been the last two weeks here.

The weather has gotten cold and snow doesn’t know if it wants to stay or go. We go to bed expecting to tackle certain projects only to find it’s snowed and nothing outside was going to get done.

We’ve been slowly finishing up our garden projects. Draining hoses, rolling up and removing black tarp from the garden, bringing all the garden tools inside.. all the things that should have been done in October. Late is better than never, right??

We also finally bit the bullet and purchased a used wood stove. Can we just talk about how much excitement I get from this? We have an oil heating system that makes my heart hurt. It’s so expensive and not as environmentally friendly as I’d like. Besides, who wouldn’t love to come home to a warm house heated by wood?

I’ve always mentioned how much I love my grandmother wood stove and wished I could take it (p.s. not an option, it’s too perfect in her home!). Come to find out, we purchased that same make and model. Couldn’t have asked for anything better! Chris has spent some time hunting down the best place to purchase the installation kit and piping to finish it all off but it’s at least in the living room. I can spend my days imagining its coziness in action! We’re hoping to have it completed by the beginning of January. Fingers crossed!

We’ve also become chicken rescuers! We adopted sweet Rosy. Her owner named her that because she’s nosy. Time will tell! She’s a sweet Rhode Island Red and I’m so happy to have her added to our flock. In our state we can only buy chickens from breeders in sets of 6 which just isn’t an option this time of year. When Rosy’s owner reached out, it was a . I didn’t even mention it to Chris until after I already agreed to take her.

This next week is going to be full of final Christmas preparations and spending lots of time with family. I hope you all get to do the same! Subscribe to our newsletter to receive this limited time offer!

Thanks for signing up!